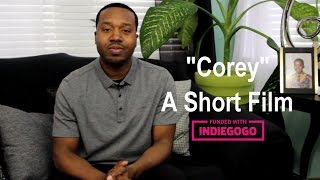 Steven has launched the Indie GOGO campaign to produce and direct his first short film! Corey, a young dad whose wife battles drug addiction, fights to protect his daughter and to stop the cycle. Growing up in during the crack epidemic Steven often wondered how the families of the drug victims were affected. Fast forward into adulthood, someone close to him had a family member that was a victim of drug abuse. They went thru so many up and downs mentally and emotionally becaus